Systema is a Russian martial art that is built around the concept of being free of tensions and stresses and full of potential and endurance. It is a combat system that focuses near entirely on real-world applications for military training. Some core technique areas include firearms training, hand-to-hand combat, and pressure point manipulation.

A Brief History
There is very little amount of history about Systema, most of which is kept at schools across the world. Though some can only be speculated on, there are a few major points that can be said with confidence. Systema is a Russian martial art, two of its core values are the inner self and non-destruction, and it is used by military as well as taught to the public across the globe.

Systema is said to date back to 10th century Russia, during a time of much conflict in many different conditions and against many different peoples. It was during this time that the Russians began to develop a system of fighting that called upon three truths; combat skill, a strong spirit, and a healthy body. It was an extremely free and loose style of fighting that relied entirely on the warrior’s own skills and limitations. This made the art very versatile as each warrior could enter the battlefield with a mindset of adaptive and instinctual fighting.

In the early 20th century, communism rose and so began the suppression of old ways. However, the effective combat provided by Systema could not be ignored, instead it was adapted and adopted by the government and used as a combat system meant only for special forces. Even to this day it is still used by some military and police units in Russia and has slowly begun to spread around the world.

What Sets Systema Apart
Unlike many other martial arts around the world and throughout history, Systema attributes some of its teachings from orthodox Christianity. It is based around two core concepts; the inner self and non-destruction. Systema is not only a physical fighting system, it is a system to train and condition the three portions of a mortal; physical, psychological, and spiritual. Those that practice Systema are taught to be free of anger, irritation, stress, and tension; instead they must replace those with explosive potential, solidarity of mind, fluidity of body, and strength of love.

There is strong emphasis on knowing your inner self but also on non-destruction. This means that for Systema practitioners, the goal is not to destroy your enemy but to protect your allies. It is the love and peace with your family, your country, and yourself that pushes you to victory. Each training session is built around these two values for each training session is meant to place the student in a position where they feel most advantageous and strong but also the most calm and humble.

Orthodox Christianity has a strong moral compass that points one to peace and love. Systema has its base in this belief as it is seen that combat and fighting are only necessary when one wishes to prevent harm from coming to those they love. While battle is a sin, this is only true when one is fueled by anger, aggression, or pride. That is why within Systema, each student must free themselves of such negative emotions and instead be filled with compassion, humility, and inner peace. Only then can a true warrior be their strongest, only when they realize what they are truly capable of and what they are meant to do and why. 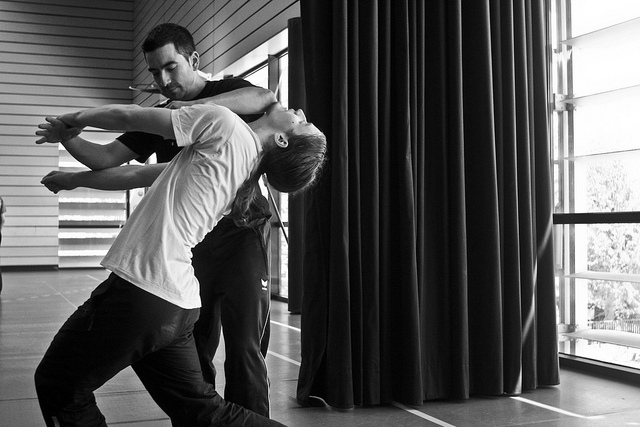 Systema for Self Defense
While there are many aspects of a strong spirit and a clear mind, the body cannot lack in Systema; that is why it is such an effective martial art when trained correctly. Systema focuses on active defense which means that when one applies its techniques, they are actively pursuing the advantage while simultaneously being aware of possible counters or external dangers. Each warrior has their own take on combat but some major areas of training include grappling, striking, knife fighting, and firearms. The key component is to not cause unnecessary harm to your opponent but simply to stop their advance.

One of the most well-known forms of combat within Systema is the use of pressure points. It is believed that the targeting of certain areas of the body can disable the entire frame. Examples would be parts of the face like the bridge of the nose and just under the chin are areas that can be easily manipulated to force surrender. This is why a lot of popular techniques revolve around areas of body leverage such as the elbows, armpits, neck, hips, and knees. These areas are often very open and there are many of them throughout the body. All it takes is to learn the techniques, take your repetitions, and apply the training.

Of course, the major downfall is that while the techniques are super effective and very efficient in practice, applying them is the tricky part. Much of the application can only be done when one is not only centered and focused but also adaptable and well conditioned. That is why such a major component of Systema training is to be at peace with who you are and what you’re capable of. This is why Systema requires the need to know what you are fighting for and why. Only with these two concepts captured can you truly be able to master the art of Systema.

That being said, Systema when mastered and trained correctly is devastating efficient. It teaches you that while you must know what your are able to do, you must also be aware of what you cannot do. That way, each day you train, you will be made aware of what you should focus on and how to adjust properly to any combat situation. That sort of mentality not only conditions the body but also strengthens the mind as you must be constantly aware of yourself and your surroundings. This also forces one to appreciate what they have and be humble to what they don’t. That sort of warrior is incredibly dangerous, especially when that warrior understands the battle is meant not for survival of self but for the survival of their loved ones.

Conclusion
While I believe in all the teachings of Systema, I lack the confidence in how to learn it. Though there are qualified instructors throughout the world, there are not enough and there really is no solid organization to truly govern the art. I don’t believe in a strict set of order like other modern martial arts which I will not speak of but I do believe it is necessary to maintain the core values and concepts within each art. Systema places a huge emphasis on being at peace and staying humble while also understanding what is worth fighting for and why. That is a concept that all warriors should be practicing no matter what art it is that they practice.

To practice any martial art is to practice a way of life; that is what Systema truly is, a way of living. It starts with the spirit, then the psyche, and only then does one train the body. Other arts and many people foolishly start at the body and some never even get past the psyche; still others do not even pass the body. That is a great shame something so great all around and in every way had to be shut out from the rest of the world. To this day, it is hard to find any legitimate masters that one can learn this art from, especially outside of Russia. However, it is the concepts that it teaches and not the actual techniques that are necessary to learn. This is because Systema is meant to be a system where each individual learns and trains for their own unique form and that is why I believe every one, not just martial artists, should begin training in Systema.