Muay Thai is the national sport of Thailand, it represents not only the passion and culture of the Thai people but also the tenacity and pure toughness, both mental and physical.  It is a vicious striking-based martial art that began and continues through a lot of tradition and spiritual engagement.  It is also known as the art of eight limbs because of its usage of fists, shins, elbows and knees.  Since it’s inception, muay Thai has been integrated into and modified by various other martial arts styles because of the devastating strikes, efficient clinch-fighting and overall athletic prominence.

A Brief History
Muay Thai is believed to have been developed sometime in the mid-16th century in Thailand as their form of unarmed warfare.  It began its spread during the war between Siam and the Burmese kingdom.  The Burmese captured many Siam warriors, among them were expert Thai boxers or nak muays.  It was here that King Mangra of Burma wanted to test the power of muay Thai against Burmese boxing.  A fighter, Nai Khanomtom, was selected and his first course of action was to perform the traditional wai khru ram muay pre-fight dance.  During the fight, he was able to quickly dispatch his opponent with a flurry of the eight limbs.  The referee declared the fight invalid because the dance, thought by the crowd as black magic, disabled his opponent.  King Mangra forced Nai to fight nine others without rest, which he did with ease due to the power and ferocity of his strikes.  Amazed, Mangra gave him freedom along with money or women (he chose the women.)

As colonialism and imperialism began, Europeans found the strange martial art of Thailand and many fell in love with the power and mysticism of the art.  Just like any other martial art, it began growing globally when nak muays began tearing through masters of other martial arts with ease during live, spectated demonstrations.  While several traditions have been removed and some added, muay Thai is a global phenomenon and many schools throughout the world teach it.  Numerous action movies have taken bits and pieces from the art and even some movies are based around muay Thai such as Ong Bak.

What Sets Muay Thai Apart
Muay Thai utilizes punches, kicks, knees and elbows done from an upright, rear-loaded stance.  Clinch-fighting was included as a way to mitigate an opponent’s ability as well as grounding the opponent through trips and foot sweeps.  As stated before, Muay Thai places emphasis on mental and spiritual training as much as physical training.  Pre-fight dances are performed before fights as a way to connect oneself with the art and the history as well as to honor and pay respect to one’s ancestors, teachers and the crowd.

Ancient Thai warriors going into battle would tie pieces of clothing from loved ones around their heads and upper arms as a form of good luck.  These became the mongkol (headband) and pra jiad (armband) which were worn from the start of their path to the end of it.  In more modern times, these items symbolized where the fighter came from and who trained them.  Some schools use the armbands as a form of rank but this a modern concept as traditional muay Thai had no rankings.  In fact, most if not all instructors should have mounds of fighting experience as fighters proved their skill in the ring. 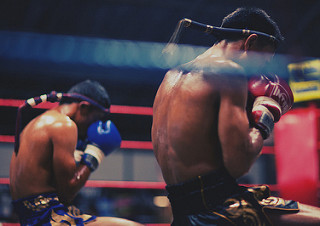 Some schools and gyms claim to have muay Thai classes when it’s actually just kickboxing based around muay Thai techniques.  Slight differences make a big impact on what art is actually being taught.  A big part of muay Thai includes heavy use of the clinch which allows for takedowns and strikes from static positions.  A secondary part is the stance, muay Thai has a more rigid and flat-footed stance compared to some styles of kickboxing that emphasize movement.

Just like any true martial art, muay Thai is a way of life more than a means of combat. Nak muays are generally some of the toughest fighters in the world.  Not only are they known for being battle-hardened and savagely tearing down banana trees but some of the best nak muays have been fighting since they could walk.  Many fighters harden their bones and thicken their skin through brutal stick grinding and constant sparring, even without protective gear.  Even nak muay farangs (foreign fighters) can be noted on the same level of savagery and vicious capability.  Nowadays, some nak muays fight so often because of the need for money even though they get paid close to nothing.

Muay Thai for Self Defense
Muay Thai is a savage and old martial art that started as a system of war.  It is one of the few striking-based arts that necessitates some form of grappling represented by clinch fighting.  Even though it has become more of a sport than a combat system, no one can doubt the power that the art of eight limbs can produce.  The lack of ground fighting and the high stance of muay Thai can be detrimental when facing an assailant with grappling experience, especially wrestling.  Regardless, a nak muay can still be extremely effective in the streets if trained properly.

Disregard the need for ground fighting and you’ll come across a big problem; if your assailant is armed or if there are multiple assailants.  Of course, multiple attackers can be more easily dispatched with power strikes than a gun staring you down or a knife driving through your guts.  But like any other martial art, simple training of these situations can be done without much issue as long as the instructors actually care about the welfare of their students and the reputation of their art.

Conclusion
Nothing really beats muay Thai when it comes to producing tough, unrelenting savages.  This is a martial art where its practitioners have put their minds and bodies through hell and back day after day.  That deserves respect from everyone, especially other martial artists.  It is a path that when walked, shapes and molds one into a human weapon with hardened bones and thickened skin.  Muay Thai was built and still stands upon tradition and elegance that few understand and even fewer participate in.  Regardless, consider this brutal martial art when thinking about training as it is an incredible way to stay in shape and without a doubt will make you far tougher than you ever were before.

One thought on “Muay Thai”